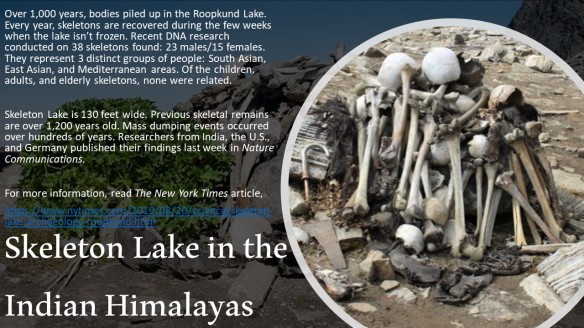 Every year Skeleton Lake reveals a little more of her secrets. The lake remains frozen most of the year; however, during a brief warm period, the ice melts, leaving skeletal remains behind. An unpublished study based on research conducted on 5 skeletons found that the remains were 1,200 years old.

A new study, however, widened the research. DNA testing was performed on 38 skeletons. Researchers from India, the United States, and Germany, isolated three geographic regions of origins: 1. South Asian, 7th-10th centuries; 2. East Asian; and Mediterranean, both 17th-20th centuries. This supported the theory of several mass dumpings over 1,000 years. Moreover, none of the skeletons were related. This warrants more research. In the meantime, read the article in The New York Times, https://www.nytimes.com/2019/08/20/science/skeleton-lake-archaeology-roopkund.html